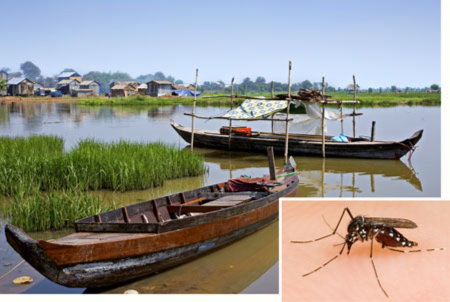 The project aims at strengthening capacity for dengue and other vectorborne disease outbreak detection, prevention and response, including at the community level, to protect vulnerable populations in areas at risk of increased vectorborne disease burden due to climate change.

Climate change is anticipated to adversely impact human health by a number of mechanisms. Ofthese, an increased incidence of vectorborne diseases (VBDs) is often cited as a leading health risk for reasons including that the distribution and behavior of insect disease vectors are affected by climatic parameters. In Cambodia, dengue and the emerging disease chikungunya are both transmitted by household-associated Aedesmosquitoes and cause tens of thousands of cases and hundreds of deaths annually. Their distribution is expanding, possibly because of climate change and related human behavior changes. Accurate monitoring of cases, understanding the responsible vector species and knowledge of the circulating viral serotype areimportant components of a climate change and health adaptation strategy. Funding for monitoring of these parameters and for outbreak response, particularly in the most vulnerable population groups, is limited.