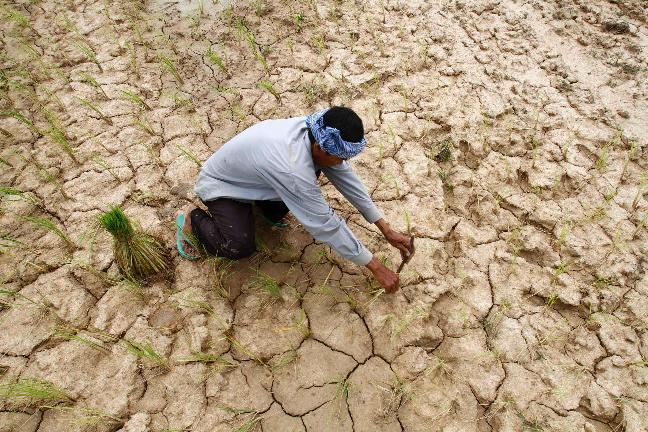 The project aims to demonstrate climate change management in 5 villages in Battambang Province, and to build awareness of Disaster Risk Reduction/Climate Change management principles and practices in 35 communities in Battambang Province to support community adaption to climate change, through a partnership with Older People Associations.
KEY RESULTS BACKGROUND
Eighty percent of Cambodia’s population is rural, and agriculture accounts for 35% of GDP. Two-thirds of Cambodia’s population is economically dependent on agriculture, and most farmers are poorly equipped to adapt to climate change. Cambodian agriculture is highly dependent on rainfall, where 85% of rice cultivation is rain-fed. Eighty-five percent of the total households in the country are agricultural households. Of these, 50% of male-headed households are older than 46 years old and 50% of female-headed households are more than 54 years old; Cambodia’s farmers are ageing.
Battambang Province is highly vulnerable to climate change. The province was affected by heavy flooding from typhoon Ketsana in 2009, and violent storms are reported by HelpAge to be more frequent and damaging.  In May 2012, rainstorms destroyed 30 houses and 2 people died; 116 families in 7 villages were severely affected by the heavy rain. However, many farmers in the target villages report that they don’t feel compelled to adapt to the projections that their villageswill face more shocks as a result of climate change impacts.
This project is designed to demonstrate climate change resilient management in five villages in Battambang province, and to build awareness of disaster risk reduction and climate change management principles and practices in 35 communes in Battambang province to support community adaptation to climate change.
This factsheet can be downloaded here:
promoting community resilience through increasing adaptive capacity to cc in bbt
Tweet